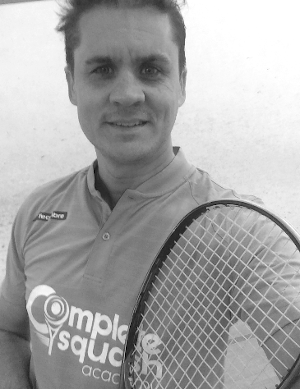 Whether it’s a beginners introductory lesson or performance squash coaching in Dublin, make sure you talk to Andrew. He has over 35 years experience as a player and nearly 15 years of qualified coaching experience to draw from.

He’s been the Leinster Squash head coach for the last two years at the Junior Interpros, and in 2020 he was appointed as the Irish National Coach of the under 13 squad.

He has a reputation of being patient with beginners and a hard task master for those who want to be pushed! 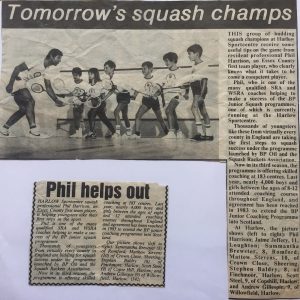 Andrew grew up in the UK and first picked up a squash racket when he was 9 years old, when he and a friend went to a taster session in the local sport centre. Jahangir Khan had just won his second of 10 British Open titles.

Swimming, badminton, music and squash lessons followed, and while all the former eventually fell by the wayside, it was squash that became his lifelong sport. Weekly training was with coach Phil Harrison while match practice was in a corporate league against adults three, four or more times his age. He soon found himself slowly moving up the leagues until he eventually started beating his Dad (and Jahangir beat Jansher 3/1 in the British Open final).

For the next few years he enjoyed playing at various levels in his home county of Essex and eventually went on to represent his university in the BUCS league (while Jansher Khan wins his third British Open).

After a number of years hiatus (, Peter Nicol winning his only British Open title) and a move to Ireland, Andrew picked up his racket again and joined Sandycove Squash Club where he is still an active member.

After completing his Irish Squash Level 1 coaching qualification in 2007 (Gaultier, Palmer, Matthew) he was one of the coaches that helped launch the junior section in Mount Pleasant Squash Club (Ramy Ashour) and can still be found helping children from the age of 4 start on the same journey he took.

Andrew was asked to join the Leinster Squash Council in 2011 (no competition held) holding the position of Junior Secretary for a number of years, and in 2016 (Mohamed El Shorbagy) he completed his Level 2 coaching qualification with Ronny Vlasseks and the WSF in Brussels.

In 2020 (just before the fateful corona-virus pandemic hit and all sporting activity was cancelled) Andrew received his first national coaching role when he was appointed as the Irish Squash National Coach for the under 13 squad – an honour that the 9 year old watching Jahangir Khan win couldn’t have imagined.

As well as coaching, he still plays in the Leinster leagues for Mount Pleasant where he is slowly but surely getting over-taken by ex-pupils that are a third-, quarter- or less- times his age. He finally accepts that the ambition of that 9 year old boy of winning the British Open now probably won’t happen.

(… and if Phil Harrison is out there… please get in touch!)